This article refers to the address: http://

Currently, mobile multimedia applications are becoming more and more important in consumer electronics. However, due to the limitation of battery life, the power consumption problem is becoming more and more prominent. How to find the balance between energy efficiency and service quality has become a hot issue in current SOC system design.

In SOC design, designers heavily reuse existing proven IP cores, which is significant for designing a complex system and guaranteeing its time to market. Currently, many professional IP providers provide a large number of IP cores that designers can choose. Designers need to select the appropriate IP cores according to the application requirements and determine the configuration of each IP core. For the design of mobile multimedia SOC, in order to achieve system-level optimization, one of the core objectives of the SOC system designer is to minimize the system cost (chip area and power consumption) while ensuring the quality of multimedia services.

This paper analyzes the coding characteristics and load characteristics of video applications in multimedia, and embeds the power management module into the multimedia SOC system from the level of system design and optimization. At the same time, the operating state of the system is combined into a series of micro-states according to different IP configurations. Based on the work done by the predecessors, the F-ARIMA model is used to predict the load, and at the same time, the important indicators for measuring the quality of service in multimedia applications are utilized. The deadline miss rate (DMR) is used as feedback control information. The combination of the two methods adjusts the running state of the multimedia SOC system in real time to optimize the power consumption in the mobile multimedia SOC design process.

Among all video compression algorithms, MPEG-x and H. The 26y standard is gradually taking the lead. These video compression algorithms bring higher transmission efficiency and also bring more computing power to the terminal. According to the characteristics of multimedia applications and their coding standards, it is not difficult to find that not all multimedia video frames require the same decoding time. Taking the frame compressed by the MPEG standard as an example, it is composed of three types of frames in total: internal, bidirectional, and predictive. These three different types of frames have different decoding complexity. Even within the same type of frame, the decoding complexity is quite different. Obviously, setting all the real-time constraints of the decoding task to the same standard will cause the system to always work under the worst branch, thus paying unnecessary power consumption.

At present, in the multimedia SOC design process, power optimization for the load characteristics of its important video applications is a very hot research issue. Common low-power design techniques include dynamic voltage scaling (DVS) and dynamic power management (DPM). In DVS technology, while ensuring the quality of service, tasks with different calculations are run at different working voltages and frequencies; while DPM technology dynamically shuts down some idle modules of the system during operation. In many researches on low-power design for multimedia applications, the main ideas can be divided into two categories. One is to treat the load of the multimedia application as a random process, then use the Markov or semi-Markov model to predict the load, and then adjust the current system running state according to the prediction result. As in the literature [4], a regression equation-based approach is proposed to predict the upcoming "work" and "idle" time through the current "work" and "idle" time of the system. In [5], discrete Markov time series and continuous Markov sequence algorithm are used to predict the system load. All of the above methods effectively reduce the system power consumption overhead, but the biggest shortcoming is that the coding method and content of the multimedia application are various, and it is impossible to find a suitable model to adapt to all multimedia applications. On the other hand, there are also studies that use real-time feedback control to adjust the current system operating state to reduce the power consumption of multimedia systems. As in [6], the authors propose a method to reduce power consumption based on display buffer occupancy as feedback control information.

Currently, the most widely used video compression standard is the MPEG-x (x=1, 2, 4) series and H. 26y, (y = 1, 2, 3, 4) series. In general, video encoders compress successive images into three different frame types, I, B, and P. The compression ratio of the I frame is larger than the P frame, and the compression ratio of the P frame is larger than the B frame. All frames between consecutive two I frames (excluding the next I frame) constitute an image group (GOP). A GOP is determined by two parameters: an I frame interframe space N, and a P frame interframe space M. Corresponding to this, for the decoding load of the decoder, there is a rule of I>P>B.

Even with the same encoding format, the load situation of multimedia applications is very different for different application scenarios. 264. The video compression standard is taken as an example to give the load status of video applications in some common formats, as shown in Table 1. 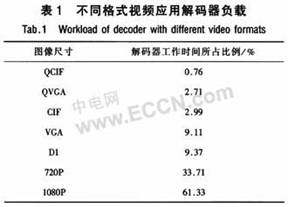 According to the experimental results of Table 1, Figure 1 will more vividly describe the working process of the decoder. As can be seen from Figure 1, the decoder has only two states, a high speed operating state and an idle state. Since the energy consumption of the decoder is calculated,

Where: T is the working time; C is the coefficient related to the system load capacitance; Vdd and f are the supply voltage and the operating frequency, respectively. For the same load, according to equation (1), it is easy to deduce that energy efficiency is optimal when the load is evenly distributed within the time interval T. Therefore, for SOC low-power system-level optimization for multimedia applications, the main idea is how to find an optimal combination of the currently available IP and its configuration according to the needs of specific applications, so that the system load can Evenly distributed within a given time constraint. Figure 2 shows the ideal state of the designer for system-level power optimization. Although this state can never be achieved in practical applications, it can be infinitely approached during the design process. 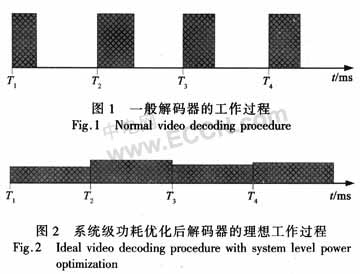 In multimedia SOC, in order to guarantee the quality of service, the design goal of the system must be for the highest load situation. However, in actual operation, the video decoder, central processing unit and some peripherals are often in an inactive or low-load state, which undoubtedly consumes some energy. To solve this problem, EDA provides more powerful support for low-power design technologies such as Multi-Vt and Muhi-Vdd. IP providers also provide rich configurations for the same IP core to meet different application needs, and Foundry also provides A richer library of standard cells and processes. In the process of designing low-power multimedia SOC, all the designers have to do is to make full use of these technological advantages and to develop as much low-power design space as possible.

Figure 3 shows the basic architecture of a multimedia SOC target system. The biggest difference between this system and the current multimedia SOC system is the addition of a Power Control Module (PCM). The module can be implemented in a flexible manner. For some functional blocks that require high real-time performance (such as load prediction), hardware acceleration can be implemented. For functional blocks that are not demanding in real time, they can be implemented by using the software resources of the central processing unit. In the design process, each IP core constituting the system is first combined into a series of micro states according to the configuration and corresponding performance of the multimedia SOC, and then these states are formed into a lookup table and stored in the power control module. . During the running process of the system, the control module adjusts the running state of the whole system in real time according to the current load situation. By configuring the register, the system can be switched between different micro states, so that the load can be evenly distributed throughout the running process. In the middle, to achieve the purpose of reducing power consumption. In the core algorithm of the power control module, this paper uses a combination of feedback control and load prediction to compensate for each other's shortcomings. For load forecasting, the accuracy of the predictive model is directly related to the quality of service of multimedia. Research shows that the statistical characteristics of multimedia video frame length show a strong long term dependency (IRD), and the system load of multimedia SOC has a direct relationship with the frame length, so in the power control module, F- The ARIMA model is used for load forecasting. The model is a typical self-similar model, which can reflect the LRD characteristics of time series well, so that the load prediction of multimedia video applications can be performed more accurately. For the feedback control mechanism, this paper adopts the deadline missing rate (DMR) which is closely related to the quality of video service as the feedback standard. The specific method is as follows: First, the system runs in the default state, usually the state in which the corresponding power consumption is the highest. Then the system detects the load according to the performance detection module and selects the prediction model from the prediction model library, and then adjusts the micro state of the current system in real time according to the prediction result. When the system performance detection module detects that the DMR is higher than a predetermined threshold, the system feedback control module is responsible for adjusting the parameters of the prediction model or completely updating the prediction model until the DMR value is lower than a preset threshold. 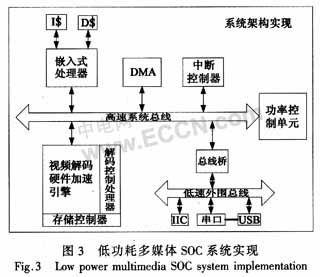 This paper proposes a system-level low-power design method for power consumption in mobile multimedia SOC design. The core of the method is to subdivide the multimedia SOC system into different micro-states by using the configuration space provided by various IPs. At the same time, combined with the traditional DVS and DPM ideas, the combination of feedback control and load prediction is used to adjust the micro-state during the operation of the system in real time, so that the system load can be distributed as evenly as possible throughout the operation on the basis of ensuring the quality of multimedia services. During the period, the purpose of reducing power consumption is achieved. Through system-level simulation and evaluation, the algorithm further reduces the system power consumption compared with the traditional method, and the average energy can be reduced by about 40%. At the same time, since the method uses the DMR directly related to the quality of service as the feedback control signal, the multimedia video DMR can be guaranteed to be below 9% and the average value is below 5% while reducing the power consumption.