Coplanar stripline (CPS) is a coplanar transmission line method proposed in the 1970s. Due to its simple structure, it is easy to bridge between active and passive two-port devices, avoiding the process of perforation. trouble. At the same time, CPS is insensitive to dielectric thickness, has small parasitic effects caused by discontinuous structures, and has low loss during high-frequency electromagnetic wave propagation. Therefore, it is widely used in feed networks and microwave circuits, such as printed dipole antennas and filters. , couplers, resonators and amplifiers.

According to the analysis of the discontinuous structural characteristics of CPS, the half-wavelength T-shaped open-circuit branch and the split-loop resonant circuit are equivalent to the series-connected LC circuit, which generates transmission zero points and realizes the stop-band characteristics. In order to reduce the volume of the filter, the groove on the microstrip line also has a stop band characteristic. Therefore, by adding T-section and T-slot resonance inside and outside the transmission line, high-order harmonics can be well suppressed, and the design of the low-pass filter wide stop band is realized.

In this paper, a novel open-loop CPS resonator is proposed, and the equivalent circuit diagram of its lumped element is analyzed. Based on the open-loop resonator, a third-order CPS low-pass filter is designed, which has the characteristics of small size, low loss in the passband and wide band width. It effectively suppresses the second and third harmonics and can be applied to the RF front-end and In a rectifying antenna system.

The dielectric plate used in the CPS structure low-pass filter designed in this paper has a relative dielectric constant of 2.55, a thickness of 0.8 mm, and a copper-clad thickness of 0.035 mm. According to the full-wave simulation software IE3D, when the line width W and the spacing S of the parallel transmission line are 0.6 mm and 0.4 mm, respectively, the characteristic impedance Z0 of the CPS is 172 ohm. 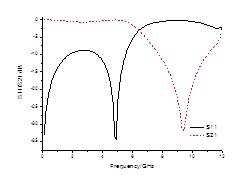 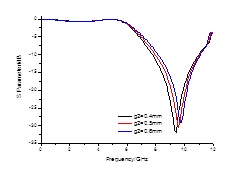